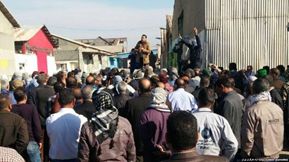 The following is a leaflet distributed by the Shahrokh Zamani Action Campaign activists in Vancouver, Canada.Solidarity with Haft Tappeh and other strikes in Iran

The recent US sanctions have made Iran’s dire economic situation even worse. But it is the Iranian regime that is the root of workers’ problems. For nearly forty years this regime has been impoverishing Iranian workers and their families; smashing their attempts to set up independent trade unions and labour organisations; depriving them of basic rights like going on strike; exposing them to appalling levels of danger at work (15,997 deaths in just 10 years!) and so on. Iran’s capitalists and their regime, however, are now facing a new wave of militant strikes and protests that are highly organised, often with radical demands and including some nation-wide mobilisations.

Stalling economy and repression
Inflation, unemployment, unpaid wages, corruption and mismanagement all predate the latest deterioration in the economic situation which has even forced bazaar merchants and truck owners to protest! As for workers, in the past few months their purchasing power has dropped by over 52%. On average they now have to spend over 70% of their wages on food!

The regime’s response to the deepening crisis has been to step up the already high level of repression against workers, women, national minorities and anyone else who is seen as ‘disloyal’ to the system. Iran’s jails are full of labour activists, women’s activists, national and religious minorities, teachers and so on. On September 8th the regime executed three Kurdish activists. A totally flawed ‘legal process’ found Ramin Hossein Panahi, Loghman Moradi and Zaniar Moradi guilty of “membership of a terrorist group, [involvement in] armed action and participation in terrorist acts”.

Wave of strikes and protests
Repression, however, has its limits – as the Shah found out in 1978-79. Since the summer there have been hundreds of strikes in the steel industry, railways and trucks, petrochemicals, and so on. On September 11th, even the pensioners had a country-wide protest. In the past few weeks the tempo of strikes has picked up: two nation-wide two-day sit-ins by teachers, an ongoing strike at Iran National Steel (INSIG), local council workers, Farabi Petrochemicals and many others.

Haft Tappeh Sugar Cane strikes
The most important struggle has been at the Haft Tappeh Sugar Cane complex in south-west Iran, with most of its 2900 workers going on strike five times between January and August 2018. On top of many ‘bread-and-butter’ issues like unpaid wages, this radical strike has posed many more fundamental problems affecting Iranian society and capitalism in general. In August Esmail Bakhshi, one of their reps, called for the formation of “independent workers’ councils … to oversee the government’s performance and government institutions.” On November 5th they began their six strike this year! The workers’ main demand is that the Iranian regime “expropriates the company and ends the private sector ownership of Haft Tappeh.” On November 8th Esmail Bakhshi, who is now in prison, said that there are two solutions: either “Haft Tappeh is completely in the hands of the workers … [and their] council” or the government takes it over “but not like before … [but] from ‘zero to one hundred’ of affairs are under the supervision of workers’ councils and workers’ general opinion …”

Solidarity
All that Iran’s workers can rely on is their own united struggle and the class solidarity of workers in other countries. We call on all trade unionists, socialists and human rights activists to support the many strikes and workers’ struggles in Iran. We are calling on Canadian trade unionists and labour activists to show class solidarity with their Iranian sisters and brothers by any means at their disposal. International solidarity can definitely contribute to Iran’s workers winning strikes and struggles. Help us support the Haft Tappeh Sugar Cane workers’ strike and other struggles that will ultimately lead to a general strike in Iran.

This entry was posted in Campaign, Haft Tappeh, Workers' struggles. Bookmark the permalink.