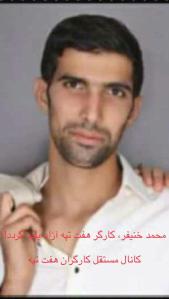 Those who thought that Islamic Labour Councils were going to be under the legal and security protection of the Iranian regime have had a rude awakening – if you resolutely defend the just rights and demands of workers you will fall foul of the capitalist system’s anti-worker laws and institutions.

The Shahrokh Zamani Action Campaign strongly condemns the arrest of Mohammad Khanifar and demands his immediate and unconditional release. All Haft Tappeh workers and activists must be freed. We call on all trade unionists, socialists and other political activists to help us in defending the rights of all workers, social rights’ activists and political prisoners in Iran.