Important news on the fourth day of the Haft Tappeh strike. 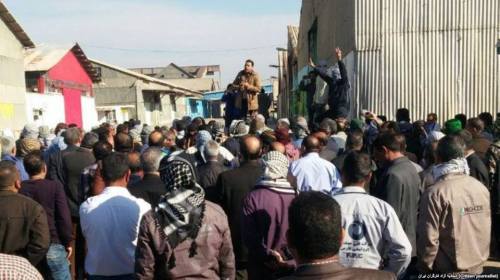 Today, August 21st, the Haft Tappeh Sugar Cane strike entered its fourth day. And it continued in a serious and determined way in all sections of this production unit. Workers in all production sections gathered in front of the management office door. The workers also united in their serious defence of the pest control office’s sacked workers and the animal feed office [workers] and saving their jobs is one of their serious demands. Security management are seriously preparing to suppress and arrest the leaders of the strike and this problem has become a block to them making speeches among workers.

The alert and conscious workers who noticed the secret presence of two of the employer’s agents in auditing and ejected them. The workers warned them that as long as their own demands had no satisfactory response, these [agents] have no right to set foot in here. The workers believe that these two people are agents of the employer who have come from Tehran to break up the land and the whole of the company.

This entry was posted in Workers' struggles. Bookmark the permalink.