The following is the speech of Nasim Sedaghat, Shahrokh Zamani Action Campaign activist in Canada, at a Vancouver rally in support of Haft Tappeh and other workers in Iran. 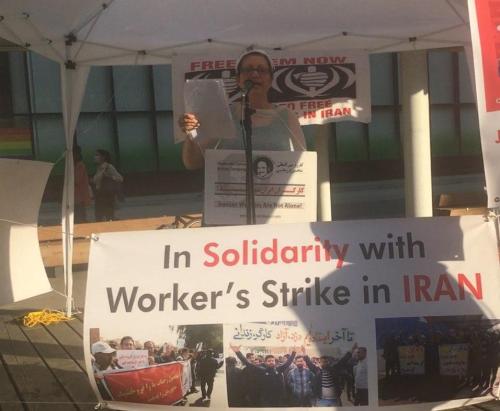 Since April there has been a huge upsurge in the class struggle in Iran. There have been hundreds of protests and strikes. Crushed by imperialist sanctions, regime corruption and incompetence, the COVID-19 crisis and Iran’s brutal form of capitalism, workers in many industries have gone on strike. Workers in coal mines, steel, rail, power, heavy machinery, textiles, timber, domestic gas, hospitals and local councils have gone on strike. The many demonstrations have including protests by teachers, nurses, university lecturers, retirees, copper miners, as well as workers in the oil and gas, petrochemicals, ceramics and oil refining industries.

The most significant strike has been that of the Haft Tappeh Sugar Cane Company’s workers. The Haft Tappeh workers began their latest strike on June 15th. Today is the 46th day of their strike. Their main demands are:

Immediate payment of unpaid wages and renewal of insurance booklets.
Immediate reinstatement of all sacked workmates.
Immediate arrest of Asadbeigi and life sentences for Asadbeigi and Rostami.
[Asadbeigi is the former CEO and Rostami the Chairman of the Board of Haft Tappeh. Both are currently on trial for fraud.]
Divest Haft Tappeh’s fraudster employer and the private sector.
Return all embezzled wealth to the workers.
End retired managers’ employment.

On the 34th day of (July 18th) they “respectfully” ejected one of the managers from his office. The striking workers have held many rallies in Shush – the nearest town – and have had widespread support among its citizens. They have said they won’t end the strike until their demands – including divestment of the private sector – have been reached.

Iran’s stagnant capitalist class and its deadlocked state and government are incapable of resolving the most basic economic and social problems affecting workers. Unemployment, inflation, low wages, unpaid wages, temporary contracts, unsafe working conditions and so on continue to grow. (And conditions for workers who are women, national minorities or Afghan refugees, or disabled, have always been much worse).

Meanwhile corruption and fraud by the bosses and the regime’s authorities have become limitless. That’s why regime’s only response to workers’ demands and the upsurge in their struggles is to increase repression. Many labour activists and other protesters – especially those who took part in the late 2019 and early 2020 demonstrations – have been sentence to be flogged and even executed. A number of these hanging and whipping sentences have already been carried out and recently five more youths were sentenced to death.

With no right to strike or form independent trade unions, Iranian workers need international solidarity to boost their morale and to limit the regime’s barbarity. The recent campaign against three death sentences has shown that co-ordinated action can check the regime’s violence.

We call on the Canadian labour movement to declare its solidarity with the Haft Tappeh workers’ strike and all Iranian workers. Show your support for workers, labour activists and political prisoners by alerting your union to the struggles of the Iranian working class and pass resolutions backing the strikes and protests.

This entry was posted in Campaign, Haft Tappeh, Workers' struggles. Bookmark the permalink.