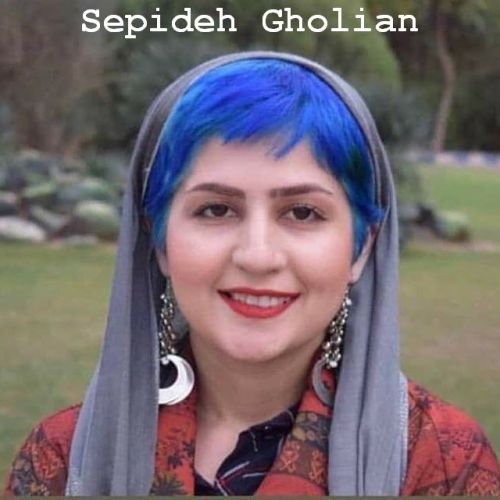 Sepideh Gholian went on hunger strike on the morning of Saturday 3rd August 2019. She will be on hunger strike until her trial on July 27th. She is protesting against the way the Iranian regime’s authorities have treated her and her parents, as well as the several prison transfers. She is now in Gharchak prison, about 800km from home.

Quoted from the Instagram page of Mehdi Gholian, her brother [23rd July 2019]:

“ ‘Her sorrow will stay in the depths of the heart …’

“Today, 23rd July 2019, after travelling for 13 hours from Dezful to Tehran, and despite their tiredness and broken hearts, my elderly parents went to Ray prison (Gharchak) to visit Sepideh. After searching them the authorities allowed them into the visiting room to see Sepideh. But after a female officer arrived, they were constantly reminded that a ring my father was wearing had not been handed over to the prison guards during the search, and made a commotion that prevented the family members from focusing on visiting Sepideh. […] Following this there was an argument between Sepideh and the prison guards due to the insulting treatment of her parents. This made Sepideh angry and sad and tearful.

“Visiting Sepideh ended after five minutes [instead of 20 minutes] with strife, and the prison authorities told us that from now on Sepideh will be banned all visits, and Sepideh replied: “After all the difficulty, what is there to frighten me? It would be better to ban visits.” … At the insistence of her parents, and the mediation of one of the prison authorities, Sepideh was allowed five minutes to say goodbye from behind the cabin.

“From this morning until her trial, Sepideh will go on hunger strike in protest against the cruelty and insults committed against her and her parents, and the several transfers to various prisons. My elderly parents, with their hearts even more broken, empty-handed and with tearful eyes, left Tehran for Khuzestan …

“Sepideh was just a student protesting against the current situation and participated in the Haft Tappeh strikes. Does she deserve all this pressure and torment?”

From Haft Tappeh to Tehran, the toilers are in jail.